Pinned to the Cause 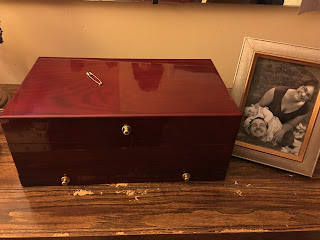 Every night, before I go to sleep, I lay out the jewelry I'm going to wear for the following day on my jewelry box.  I'm organized like that.  Guess that goes with the whole librarian stereotype.

This morning I realized that the only piece of "jewelry" I had selected to add to my ensemble last night was a lone large safety pin.

I dithered.  I've read both sides of the arguments: for and against wearing of the safety pin.  I was at first excited about the concept, but then the potential magnitude of the statement I would be wearing for all to see gave me pause.

Was I ready to step in if I saw someone being mistreated?  I've learned through experience that the theory and practice of such are very different things.  You like to think you'll stand up for your principles and defend other's rights to their own, but it's not that easy for many reasons.

And then there was the issue of my students and my public patrons.  My administrators and peers.  What would the wearing of such a small twisted piece of metal say to them?  Would it denounce me as radical or label me as supportive?

I just wanted to tell people that I'm here to help; more than my current position as a public servant already declared.  Perhaps it's a vain attempt to do SOMETHING while feeling impotent during these times.  When it comes to sociology, government, politics, and history I sometimes feel under-educated to handle the concerns of my students, yet they still turn to us as educators and librarians; as cognitive authorities on the answers to all of their questions.

My fear of offending someone or doing the wrong thing kept me from wearing the pin, but something yesterday changed for me.  I saw a friend wearing the pin.  He was just the kind of person I would expect to wear such a symbol since I'm familiar with his general views.  But my reaction to seeing the pin on his lapel surprised me.  It felt like a sudden hug.  Without words, someone was able to tell me that as a minority of multiple categories, it was going to be ok.  That people are thinking of me and thinking of us.

And so today, and for as long as the movement holds positive meaning for some, I will wear the pin.  I will state that me and mine are a safe haven to all.

I'm going to need safety pins in whole bunch of colors and metallics though because this librarian is still a bit of a fashion diva.