The Inspiration Behind Your Procrastination 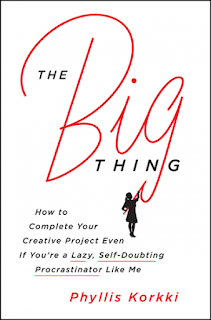 When I began reading The Big Thing I was expecting organizational charts, schedules, and/or tips on how to be creative like people who do it well.  I was expecting a convert, but was instead amused to learn that the author herself still struggles with her creative process on a daily basis.

The Big Thing by Phyllis Korkki, on How to Complete Your Creative Project Even If You’re a Lazy, Self-Doubting Procrastinator Like Me, was a fascinating read.  Mostly because I am not lazy, neither am I self-doubting, nor a procrastinator.  I suppose that means that I am also not humble, but the point is that The Big Thing  was not written for people like me.  If I say I’m going to do something, it gets done and it gets done well and it gets done quickly.  That’s just the way I have always operated and I never quite understood why people ever struggled to get things done…

My husband, like the author, has been struggling with a “big thing” of his own.  He too is trying to write a book and it’s incomprehensible to me how much of a challenge it is for him for stick to a schedule and just write, especially when it’s something he claims to be so passionate about.

According to Korkki, the obstacles to creative project completion aren’t really about time management.  At the core, it’s about psychology, as well as a smattering of other surprising suggestions like posture, breathing, and recognition by cognitive authorities in your medium.  In other words, it’s mostly in your head!  Not to demean these challenges, by any means.  The struggle is certainly real, as Korkki clearly demonstrates in this memoir-style account of her trying to complete this very book.  But it’s all about defeating the naysayers of your subconscious.


I found some parts of the book to be a bit too tangential though.  Some of the reasons behind laziness, self-doubting and procrastination that Korkki explores I found to be a stretch; more of a stream of consciousness thought experiment than proven methods to overcome these obstacles.  As long as you keep this in mind, this book is definitely helpful, to those who call themselves procrastinators, as well as the people who attempt to live with them.  Less of a manual on HOW to complete those projects, as why you didn’t complete them in the first place.

About The Big Thing

A New York Times business journalist explains why it’s important for people to pursue big creative projects, and identifies both the obstacles and the productive habits that emerge on the path to completion—including her own experience writing this book.

Whether it’s the Great American Novel or a groundbreaking new app, many people want to create a Big Thing, but finding the motivation to get started, let alone complete the work, can be daunting. In The Big Thing, New York Times business writer and editor Phyllis Korkki combines real-life stories, science, and insights from her own experience to illuminate the factors that drive people to complete big creative projects—and the obstacles that threaten to derail success.

In the course of creating her own Big Thing—this book—Korkki explores the individual and collaborative projects of others: from memoirs, art installations, and musical works to theater productions, small businesses, and charities. She identifies the main aspects of a Big Thing, including meaningful goals, focus and effort, the difficulties posed by the demands of everyday life, and the high risk of failure and disappointment. Korkki also breaks down components of the creative process and the characteristics that define it, and offers her thoughts on avoiding procrastination, staying motivated, scheduling a routine, and overcoming self-doubt and the restrictions of a day job. Filled with inspiring stories, practical advice, and a refreshing dose of honesty, The Big Thing doesn’t minimize the negative side of such pursuits—including the fact that big projects are hard to complete and raise difficult questions about one’s self-worth.

Inspiring, wise, humorous, and good-natured, The Big Thing is a meditation on the importance of self-expression and purpose.

Phyllis Korkki is an assignment editor and reporter for the New York Times Sunday Business section.