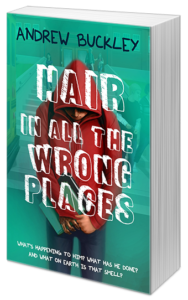 Gr 5-8-- Like most 13-year-olds going through puberty, Colin Strauss has to deal with extra hair, body odor, and growth spurts, but turning into a fledgling werewolf makes things a lot more complicated. Forced to live with his bitter grandmother because his high-powered lawyer parents couldn't be bothered with him, Colin slumps through eighth grade, constantly bullied, harassed by figures of authority, and convinced that he is a total loser. A turbulent and hazy night changes all of this when he gets bitten by a werewolf. Fellow middle schoolers will commiserate with Colin's life challenges. Secondary characters are well-developed, as are the supernatural elements of the story. However, the pace of the first half of the novel often makes it difficult to understand what is happening, requiring frequent rereads. Once the plot is established, though, it is a real page-turner right up until the satisfying end. Several unrealistic characters border on hyperbolic, such as a hired principal who has "absolutely no qualifications," a teacher who has "a particular hatred for students and other teachers," and the only doctor in town, "a notorious drunk who [is] just as likely to fall asleep during an appointment, as he [is] to diagnose the common cold as Ebola." There are explanations for some of this behavior revealed later on, but most of the adults encountered in this work are cruel and incompetent.

VERDICT Hand this one to students interested in supernatural creatures of all kinds, light romance, humor, and action.--Carina Gonzalez, Lawrence High School, NJ