City of Blades: A Divine Read 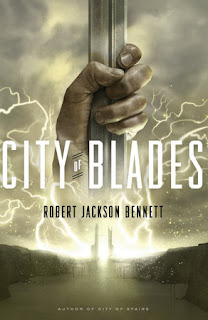 City of Blades is the second book in The Divine Cities series by Robert Jackson Bennett.  It tells of the continuing war between two peoples:  the Saypuri and the Continentals who once enslaved them.  While reading book one, City of Stairs, isn't required to enjoy this book, it is recommended to fully understand some of the motivations behind the main characters.

Saypuri General Turyin Mulaghesh - a secondary character in City of Stairs - takes center stage in this novel.  She is a blunt, gritty, seasoned veteran who constantly struggles to reconcile her duty as a soldier with the unimaginable amount of blood that she's seen, and spilled.  Hailed as the "Hero of Bulikov," for an impactful battle that occurred in the city of the same name, she presents a constant contradiction of self.  Is she the hero that everyone claims her to be or is she the monster that she recognizes from her own past?

Mulaghesh enters retirement at the beginning of the book but, through a direct request from her old friend Shara Komayd, (who is featured in book one City of Stairs), serves her country for what she believes will be the last time.  But the catch is...Shara won't tell General Mulaghesh what the mission is.

City of Blades is a story of dying gods, religious fanaticism, terrorism, and the red tape of bureaucracy.  While categorized as an epic fantasy, I felt that this book had a heavy amount of mystery to it as well.  Much of the story revolves around relentless attacks in back-water Voortyashtan, which is occurring the same time that the administration is also trying to rebuild their harbor, as well as their economy.  What General Mulaghesh must discover is who is behind the attacks, whether or not the divine are involved, and how many more people are going to die under her watch.

Robert Jackson Bennett not only has a female as the main character in an epic fantasy story, but she is a soldier in her late middle years.  This is not generally typical of epic fantasy and I know because I've read a lot of it!  Yet Bennett nails it and has created a strong and complex character who can serve as a role model for readers and a template for future writers.  You've definitely never met anyone like Turyin Mulaghesh!  The author actually presents many female characters throughout the book and constantly breaks stereotypes.  It is so refreshing.

Recommend this book to fans of military fantasy, (such as author Myke Cole who consulted on City of Blades), epic fantasy, urban fantasy, fantastic mystery, dystopias, and even science fiction.
I received this book from Blogging for Books for this review.