A Dangerous Place: Caught Between a Rock and a Hard Place 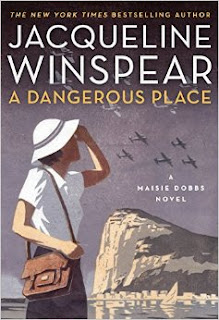 A Dangerous Place is Jacqueline Winspear's 11th book in the Maisie Dobbs series.  It is spring, 1937 in the British garrison town of Gibraltor.  Late 30's Gibraltar is a place of "between," full of transient people, clashing cultures, and dangerous opinions.

Maisie Dobbs, the lead character, is also "between."  A woman of many talents, principal of which is as an investigator.  However, personal tragedy has led her to flee her profession, or at least she tries to.  Trouble seems to have a way of following her.

Murder, lies, and wartime propaganda make this a page-turning read, but without the extreme highs and lows of typical suspense thrillers.  This book, obviously written by a seasoned author, seems to flow effortlessly.  The characters and setting are all so well detailed that the reader is quickly immersed in the history of this tumultuous time; a definite recommendation for anyone studying the underlying emotional motivations behind World War II, and the economic impact that still arrested much of the world after World War I.

The reason I gave this book three stars instead of more is because of the ending.  The entire plot is a slow burn of untangling twists and revealed truths.  However, what would be the climactic reveal felt like it was delivered as an afterthought to the main character's next venture.  This may be a customary  tactic for Maisie Dobbs novels, I don't know.  This is my first.  But rather than hungrily making me want to read the next book, I instead just felt robbed of my "aha" moment that I had been climbing towards.

Either way, if you are a fan of historical fiction, Winspear is definitely an author you should add to your list.  She is a very talented writer.