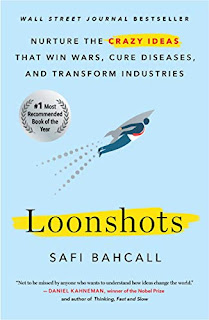 In “Loonshots,” Safi Bahcall aims to “show you how the science of phase transitions suggests a surprising new way of thinking about the world around us – about the mysteries of group behavior.”

Bahcall combines psychology, history, human behavior, and, surprisingly, physics, to explain “why good teams will kill great ideas, why the wisdom of crowds becomes the tyranny of crowds when the stakes are high, and why the answers to these questions can be found in a glass of water.” While the author achieves the stated purpose, I think the detailed histories weren’t entirely necessary to get his point across.

The arguments of “Loonshots” are presented concisely in the prologue. The book continues in three distinct parts: Engineers of Serendipity, The Science of Sudden Change, and The Mother of All Loonshots.

If you appreciate understanding the motivations behind decisions, “Loonshots” will be difficult to put down. The book is an easy read for non-scientists with funny subtext, illustrations, and stable metaphors. “Loonshots” is also exceptionally well-written with descriptions such as that of Vannevar Bush who was depicted as “a tall, thin, upstanding preacher’s son, who swore like a sailor and dressed like a tailor.” Those who generally find history inaccessible will also appreciate Bahcall’s cinematic-style retellings of major historical events.

Additionally, I feel that anyone who runs an organization of any kind should read, at least, the first half of this book. Through “Loonshots” we learn that both soldiers and scientists are needed to spur innovation, but the two sides rarely communicate well with each other. Bahcall helps explain how to create and sustain an environment where employees are invested in company outcomes and are able to generate new ideas.

As an aside, I feel that the tenets of “Loonshots” could be grasped just by reading the prologue and summarized in full with one-third the words. Bahcall is a scientist and clearly wants the reader to understand how and why his theories have come to light. The result is an iceberg of a book that floats due to significant mass, but whose point can be seen clearly enough.